"If we don't fit into the box, then people don't know how to interact with us."
-- Vlogger and anime fan Sensei Aishitemasu, summarizing the impact of unconscious bias on students of color.

As every teacher knows, classroom dynamics are shaped by a number of factors. A majority of male or female students, an early morning lecture, material that's hard to make relevant to students' daily lives -- each of these has the potential to affect the outcome of a class.

Race is perhaps the most significant factor. Diversity in the classroom can be an opportunity for transformative learning, but white educators need to be aware of ways in which their own unconscious bias about race -- not to mention the unconscious bias of other students -- affects students of color and shapes classroom dynamics even as they welcome different perspectives.

What is Unconscious Bias?

Unconscious bias refers to the set of deep-seated assumptions each race holds about the others and, in particular, the assumptions the majority holds about minority races and ethnicities.

It's more than just a set of stereotypes, though that is certainly a part of it. Because white people are at the center of our power structure, whites control the cultural discourse even as people of color make important contributions to our cultural identity.

Therein lies the paradox. The dominant culture absorbs differences and multicultural influences, yet it assigns strict roles to what people of color can be and how they "should" act. This bias puts people of color at the margin -- keeping them at arm's length.

In a recent video about her husband's participation in a high school Anime Club that was mostly white, vlogger Sensei Aishitemasu gives a poignant example of how unconscious bias plays out. She says that the white students didn't know what to make of her husband's presence in the club because his love of anime put him outside the box of activites generally associated with black boys and men.

Because he was not a rapper or an athlete or a drug user, he simply didn't fit into the white kids' conception. He was given the cold shoulder until he gradually earned his acceptance by showing his mastery of anime.

And as she points out, even that acceptance was provisional. When he brought some hoodie-wearing friends, the white kids were scared and kept to themselves. It was as if he suddenly revealed himself and became the Other again.

"Why do we have to go through that [being put in a box] and white people don't?" asks vlogger Sensei.  Her husband adds, "The craziest part is that anime is not even a white thing.  It was created by Japanese people!"

These are not easy questions for educators to ask ourselves, because we strive to be enlightened and fair. But our goal as educators is to teach every student -- and if we are boxing some students in, we are turning some students off.

The next valuable step is to engage with some of World Trust's diversity films or racial equity learning modules. The film Cracking the Codes was the inspiration for Sensei Aishitemasu's comments about the Anime Club. The film uses anecdotal stories that are easy to relate to and let people understand white privilege and unconscious bias without feeling alienated or shamed. It has been described as a "transformative learning experience."

Here is the clip from Cracking the Codes that Sensei refers to in her vlog:

World Trust seminars are another great way to spur dialogue and build community. In one format, participants learn about the system of racial inequity, then Cracking the Codes film segments are braided with facilitated dialogue. People relate the film's stories to their own experience of the internal and external components of systemic inequity.  This window of insight lets people connect to one another, develop a deeper understanding of how unconscious bias effects their interpersonal relationships, and discover ways in which they may be unknowingly perpetuating inequity.

4. Connect with Your Students

When we see race first -- even on an unconscious level -- we have dismissed the possibility of knowing our students as individuals. Students of color pick up on that; they've already had years of practice.

Allow parts of the curriculum to unfold and be student led. Have them suggest ways of creating a community in the classroom, what they come up with will likely surprise you. Connecting is where learning and alliance building happen.

Besides, it can be transformative for you AND make learning more fun. 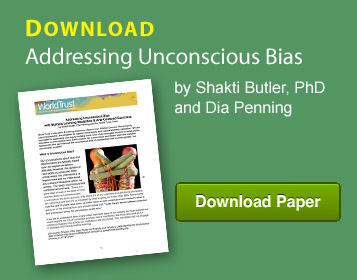