A professor of sociology at Laney College in Oakland, California, Ericka has been a human rights' activist and educator for over 30 years. She is skilled at finding ways to appeal to people on an emotional level, using their common experience to engage in community building and critical thinking.

"One question that I always ask is, 'How many people in the room have children?'" Ericka explains. "This lets people express their own compassion. And then we look at the film we're watching, or the story we're discussing, through the lens of our own beloved children. It shifts the tone of the conversation from people's heads to their hearts. An added advantage is that talking about the world we want for our kids takes the conversation away from the personal and makes it more universal."

"I love to watch how Ericka invites people to connect, grow and tranform," says Shakti Butler, Founder of World Trust, "She sees the best in every human heart and invites their greatness to shine.  She works from the belief that most people want the same thing: happiness, connection and a chance to participate fully in the web of life! We are fortunate to have such a brilliant and masterful educator on the World Trust team."

What Ericka's Clients are Saying

"Ericka is an amazing, beautiful, gentle, loving soul. I would absolutely recommend her."

"Ericka was incredibly attentive and generous with her time and spirit."

The Main Elements of Ericka's Approach

Ericka has meditated every day for 35 years. This practice allows her to still her mind when necessary and has made it easier for her to tap into her intuition. "What people feel from me is peacefulness and calm," she says. "That becomes the underpinning for the conversation rather than the angst that they themselves might bring into the room."

"I let people know that this is not a room of blame," she says. "I also make sure they know that we can be lighthearted, too. We don't have to take ourselves so seriously. I let them know that all the emotions they may be experiencing are emotions that I have had, or still do have, and that it's important for us to be gentle with ourselves."

Ericka takes special care to include all participants equally. "I think it's especially important to acknowledge young people in the room," she says. "Because sometimes older people can hog the airtime, telling war stories and saying, 'This is how the world works.' I don't let that happen."

An Example of Her Work with World Trust

Ericka has facilitated workshops at numerous institutions including the UCSF Alliance Health Project in San Francisco and Skyline Community College in San Bruno, California. When asked if there was a moment that stood out for her, though, she recalled a comment that took place at Dominican University in River Forest, Illinois after the screening of the diversity film, Cracking the Codes: The System of Racial Inequity.

The group was discussing the segment of the film called "Trip to the Grocery Store," in which a black woman receives unjust scrutiny by a white cashier until the woman's sister-in law exerts her white privilege to call out the treatment. A woman from the group said, "I really don't think it was racism at all. I think that cashier was having a bad day."

Ericka remarks: "She made the comment because she felt that she could and she'd been socialized to believe that it was okay. Maybe she had been asked by some boss to engage in discriminatory behavior and justified her own actions in a similar way. I said, 'You know, if I go to work, I don't get to bring my bad day with me.' And the whole room erupted into conversation."

"That's a description of something that really stood out for me," Ericka says. "Where the challenge led up to a stronger conversation, a deeper one. It eventually opened into another conversation about the school's lack of cultural humility. It became a transformative learning experience."

Widowed and left a single mother at the age of 19, Ericka founded Black Panthers Party chapters in Los Angeles and New Haven, Connecticut. She went on to direct the Oakland Community School, a community-led and student-centered precursor to today's charter schools, from 1973 - 81. She was the first woman and person of color to serve on the Alameda County Board of Education.

An advocate for whole child education, restorative justice, and spiritual practice in activism, Ericka has supported thousands of conversations about social change. She speaks of teaching and service as having "an exponential life in the distance."

Founded by Shakti Butler, PhD, World Trust believes that conversation about systemic racism can be a catalyst for social change. Contact us if your group is interested in hosting a screening of a diversity training video or if you want to work with a talented facilitator like Ericka Huggins. 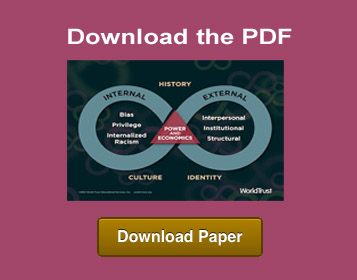