A World Trust donor recently sent us link to an article entitled "7 Things I Can Do That My Black Son Can't."  The author, Calvin Hennick, is a white father of two bi-racial children.  We appreciate his commentary, including this:
In my experience, white people (and straight people, and male people, and Christian people — all groups of which I’m a member) tend to dismiss the notion that we’re privileged. It’s an uncomfortable thing to acknowledge that you’re the recipient of unfair benefits, especially when those benefits are often nearly invisible to those who receive them. But when you’re a parent, those privileges stop being invisible. It’s the reason why male congressmen with daughters are more likely to support women’s issues. It’s the reason why Ohio Sen. Rob Portman suddenly declared his support for same-sex marriage after his son came out as gay. And it’s the reason why, everywhere I look, I see hassles that my son will have to face that I don’t.

Hennick goes on to enumerate a list of things he can do "without hassle." For example, walk through a store without being followed, lose his temper in traffic, and complain about racism.

It isn't hard to find lists of activities that white people take for granted that can be uncomfortable or even life threatening for people of color, African American men in particular. And, it is unique and hopeful to read a list compiled by a white man from his observations as a parent.  At World Trust we know the positive impact white role models have in engaging more white people in racial justice.  We're looking forward to hearing more from Hennick as he and his family navigate the racialized landscape of our society. 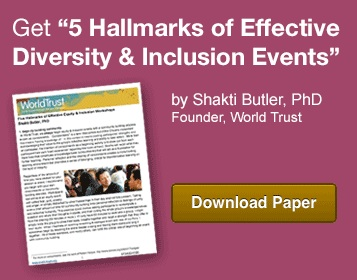