“The classroom remains the most radical space of possibility in the academy.” -bell hooks

This year World Trust is collaborating with several individuals, across different sectors, to underline the importance of open authentic dialogue about inclusion, race, and power. In this piece Educator Bobby Biedrzycki and Graduate student Courtney Zellars examine why building a foundation is important for that work.

As an educator, some of the most beautiful, transformative, and scary spaces I find myself in are dialogues about race and identity. Any classroom space where people are sharing stories and experiences, and others are listening and reacting to that openness, can be life-changing. Much of the work I find myself doing in the classroom (and my classrooms are everything from college lecture halls to living rooms) is rooted in finding ways to collaborate with people on creating these kinds of spaces. Safe spaces. Honest spaces. Spaces of radical possibility.

Listen to your body. That was one of the first lessons Bobby taught us in our Story and Performance class this past semester.  So we were comfortable with ourselves, each other, and the class routine. But even while sitting in such a comfortable circle—many of us were shoeless or stretched out on the carpet for our usual five minute check-in at the beginning of class one mid-October day—I still tensed at the mention of the protests in Ferguson.  I knew where the conversation was going and I wasn’t sure if I would like it once we got there.

Truth is, I’m always tense in conversations about race and identity. I’m the Black woman who is constantly aware of the race ratio in any setting, especially in the classroom. Probably because I’ve always had a skewed experience, predominantly white from sixth to twelfth grade, and then predominantly black all throughout undergrad at Howard University.  But this classroom’s ratio was 8 people of color to 7 white people (professor included).  Earlier in the semester, I’d noticed that it was the only classroom experience at a predominantly white institution since elementary school, where the minority made the majority.  Even still, I didn’t think I was ready to go there with any of the people present.

Like Courtney, I’m also constantly aware of identity in the classroom. And part of facilitating any space is identifying myself as an able-bodied, cisgender, white male (who also happens to be queer) right at the top. I acknowledge these parts of myself before I teach in any space because some of these things are sources of power and privilege, and as someone working to dismantle that same power and privilege in the world it feels essential to first claim it straight up.

I teach writing and performance at a Midwestern media arts college. Most of the students are studying an artistic craft—dance or filmmaking or creative writing. And most of the classes I teach revolve around story. My course titles almost never include the words race or identity or politics. But I cannot imagine teaching story without critically engaging all of the above. I mean really, is there anything more political than a story?

This past fall I taught a course called Story and Performance. It focused on writing and performing personal narratives of all kinds. All classrooms are sacred spaces. But a classroom focusing on stories from one's own life is a uniquely blessed space. It has to be safe, or our art suffers. It has to be safe, or our humanity suffers. It has to be a space where we can have rigorous and complex dialogues about our lived experiences. So how do we build radically open classrooms? Safe spaces where growth can happen? For me, it's not something I ever do alone. It's a collaboration with the students in the room, and it's constant. One of the tools we used in this class was a “check-in.” I'm sure many of you who are teachers do this, right? Take some time at the beginning of class where everyone can give something over to the group. I've used it for years in almost every kind of setting. It might seem remedial. It is not. How can we journey the next four hours together through personal history if we don't know where everyone is at in the moment? But sometimes a check-in leads to so much more if we give it the space to do so.

Classroom conversations on race and identity have always left me more frustrated than hopeful.  I’ve frequently found myself on the defense, trying to stand in solidarity with every absent person of color I know, while also trying to figure out and articulate exactly who I am.  Questions like, “How do I make sure white people get that African-Americans are angry because we don’t live in a post-racial society, contrary to our having a black president?” find themselves swirling around in me.  And with many of these conversations being brief, often cut off by professors with a lesson or discussion leaders with an agenda, I’ve had to weigh which of my comments, experiences, and thoughts are essential and in dire need of being expressed, and which I should just keep to myself. So I often choose to remain silent, afraid I’d be an incoherent mass of frustration speaking at people who I assumed just didn’t get it and probably never would because it was too be big to be understood in a quick conversation. That’s what I expected the conversation in October to be – just another frustrating aside.

Except…that didn’t happen.  The class didn’t follow a script and the discussion stretched out past the five or ten minute allowance I’d expected, eventually taking up nearly three hours. My classmates began opening up about their own experiences, and asking others about theirs. The tension I originally felt began to fade and we just talked and listened to each other.

One classmate, who appeared white at first glance, discussed how she hated the “old white man” trope for The Man behind the scenes, pulling the strings.  She also mentioned how she hated the assumptions that came with discussions of race, because people often assumed she was just a white girl.  And she was.  But she was also Ecuadoran and growing up in her particular high school she was considered a minority.

An African-American student in the class talked about how she didn’t feel her voice was needed in particular battles of race and economic status because they weren’t experiences that she’d had.  She said she didn’t mean to be uncaring about those issues, she was just aware that there were other voices out there that could do the issue better justice than she could.

There we were, tossing out questions, experiences, thoughts—having a race discussion in the middle of class and it didn’t even feel like it!   Probably, because it wasn’t.  We sat in our usual circle, some of us sprawled across the carpeted floor with our shoes off, others in chairs.  Bobby was doing his usual thing, primarily nodding and listening. We were having our weekly check-in, getting to know what we all were thinking and feeling, but we were talking about race.

That radically open space Courtney is talking about, one that shifts away from blame and into understanding and accountability, didn’t just appear. In this class we were intentional about building it together from day-one through ensemble theater work, listening exercises and trust activities. In fact, I was using our work in those previous activities to continuously coach students during this dialogue to, let go of concentrating on the next thing they wanted to say, and instead, deeply and exquisitely listen and look into one another. But my guess is that most of these coachings went completely unnoticed by students on a conscious-level.

And truth be told, we did have four hours-worth of writing work to do that day. But we had to let that go. This dialogue was just as important as the drafting of our stories. And the art ultimately benefitted. The creative work in the class jumped to brave new levels after this.

Afterward, a classmate mentioned how well the conversation worked:  I think a lot of us have had a few classroom-race-discussions-gone-wrong. I spent that evening thinking about the discussion and all of us have referenced it since as an example of effective and affective communication. I think it worked so well for a few reasons.

1)      The conversation just happened.  It was organic, not planned or moderated.  We went wherever the conversation took us.  There were no time restraints, no hidden agenda with pre-established questions or comments that needed to be discussed.

2)      We as a class had been working on developing a safe space since Day 1.  We originally thought we needed to be safe to feel comfortable performing.  But that overflowed into this conversation. Our familiarity made it easier to let go of assumptions and stereotypes.  No one felt attacked or vilified or scorned because of what they voiced.  Whenever something uncomfortable was said, others were able to ask questions, speak up, and explain their perspectives.

I think before truly productive discussions of race can be had in any situation, whether the classroom or on a national level, people will have to build relationships amongst themselves.

How do we create spaces of radical possibility? First of all, we prioritize them. We open our hearts and our course outlines and we get brave. I keep thinking about what Courtney says in regard to no time restraints or hidden agendas. Whatever we use to design our spaces, why are we doing it all if not to support these kinds of dialogues? We found that checking-in with each other's mental, physical, emotional and spiritual states-of-being on the regular allowed us to do racial justice work right alongside creative practice and have thing whole feel like an organic conversation, because it was.

Bobby Biedrzycki is a writer, performer, educator, and human rights activist who resides in Chicago, IL. He's an education associate at the Goodman Theatre, a company member of 2nd Story, and faculty at Columbia College Chicago, where he was the 2013 recipient of the Excellence-in-Teaching Award. Bobby is deeply committed to collaborating with youth artists working to change the world, and is @bobbyfloats on all forms of social media.

Courtney Zellars is a reader, a writer, and an occasional photographer originally from Louisville, Ky. She is a people enthusiast and a lover of words, she received her bachelor's in Print Journalism at Howard University and is currently pursuing her Master's in Creative Writing Fiction at Columbia College Chicago.

World Trust supports educators and students in finding many ways to talk about diversity, race, power, and social justice. Through our films, free downloadable conversation guides and workshops we offer accessible tools to expand this space and engage in authentic dialogue. 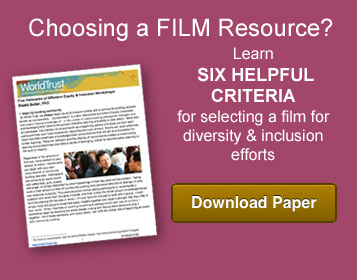